Ahhhh… the energy of youth: impassioned performances, physical leaps and bounds, bodily contortions, abrupt turns, dance numbers and simultaneous songs, sexuality bursting at the seams, the promise of more, feet that whisk off and on the fiery energetic stage, and ….yes, more.

That’s what “Sly Fox” at The North Shore Credit Union Centre for Performing Arts (Capilano University) and “Spring Awakening” at Studio 58 (Langara College) have in common. Large impressive casts that seize the stage with vim and vigour explore each side of the theatre mask.

“Sly Fox” is a wild comedic romp directed by well-known casting director Stuart Aikens who chose to colour this production originally set in San Francisco in the 1800’s to an 1850’s Western caper. Larry Gelbart’s play adapted to this genre perfectly.

With the theme of greed dripping and oozing everywhere, the main characters had their objectives clear. Get the gold. At whatever cost.

Therefore, there was a lot of lying, cheating, faking, batting of eyelashes and other parts, and false empathy. The main dude, Foxwell J. Sly played boldly by Adam Kozlick, takes his gold digging community on a false ride into his sick bed in order to attract the gold to him. He’s successful. To a point.

When they all wind up in a strangely run court, with their lies running amock his lawyer, his doctor, his “lover”, his assistant, and his friend squirm under pressure.

If you have been reading any of my posts you will know I love it when a production explores bold physical choices. “Sly Fox” had me grinning as a result of many audacious, committed and believable gestures.

And, stand by for that last unexpected energetic kick. What FUN!

How wonderful to witness “Spring Awakening” in the same week rounding off my student show experiences. Directed by David Hudginsat Studio 58 this musical is a tear at your heart story of teen angst set in a German town in the late nineteenth century. Scenes are clearly of that time, but the musical portions call to modern day. 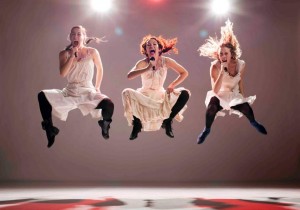 This jammed packed stage had a lot of singing talent, and the music, unfamiliar to me, was beautiful, emotional, raucous, punk-ish and played without flaw by their house band, accompanied by acting student Masae Day, on the violin, whose musical talent gets a lot of mileage at Studio 58.

The story of love, sexual longings, and rules governed by unknowns to the teens provoked, for me, memories of my own teen-hood adventures. It seems to me that the late 19th century and my youth weren’t that far off.

Also, I found myself recalling my own third year student productions when I was studying at Le Conservatoire many moons ago. The energy of that time is such that hope springs eternal and you’re ready to take on the world. Just like the play’s theme.

Now, I am at a different time in my life where I teach and help facilitate that inspired energy in young acting students. But, when I watch these shows, my old “young” self can’t help but want to leap up, join in and experience some of that energetic passion. Lucky for them my sore back kept me securely in my seat. (One number in “Spring Awakening”, “Totally Fucked” was highly tempting!)

“Spring Awakening” at Langara’s Studio 58 closes on February 23. Go if you can find a ticket (many shows already are sold out). There is a highly talented cast about to be released to our acting community. Be the first to witness them!

Unfortunately, the scheduled run of Sly Fox was short, but we can only hope there will be a revival. Bookmark Capilano University’s “North Shore Credit Union Centre for the Performing Arts” and don’t miss the next shows. It’s a win-win situation! You support our future entertainment, and get to disappear into some theatre for an evening.

Homelessness and Sales…. One… for World Theatre Day
Scroll to top