Years ago, after a back operation that stopped me working part-time as a costume set supervisor,  I started a little business called HotScarves. I’d send you to the website, but… it ran away to the outer world of lost websites.  I had worked hard on my creation, a heated fleece scarf, but after many scarves my energy was waning and my “conviction” was dropping. 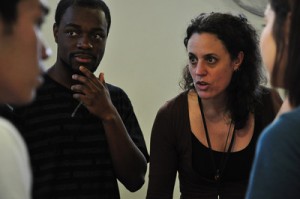 I was doing it for the wrong reasons. Money. And, that’s not enough.

I had a little chat with myself, and dug deeper into my soul. I returned to my love of acting, of directing and designed the workshop I now offer. Buffoonery Workshops.

Okay.. that’s the reader’s digest version, but that’s all you need to know, for now. What is important here is that my conviction for my service is a hundred fold more than my cozy fleece. I’m excited, passionate, and I love stirring up the Buffoonery in every one. It’s a freeing activity, and even soulful. My attitude and staying power is strong, and I believe it’s all about that word in the following brilliant article: Conviction.It is the driving force to our creativity.

Is your conviction strong in your working life? And, what is it?

In business circles, “creativity” has become a buzzword to describe a desired trait among employees. But to innovate, conviction is more important.

FORTUNE — In business circles, “creativity” has become a buzzword to describe a desired trait among employees. It’s widely believed that having creative thinkers on staff will boost overall team levels of innovation. Yes, creativity can lead to a surplus of original ideas. But when it comes time to sell those concepts internally, and then later take those ideas to market, creativity is not enough. More important is conviction.

Look at the most-admired business leaders today. They tend to resist compromises, even when faced with widespread skepticism or even complaints from customers. Mark Zuckerberg, Facebook’s young founder, is known for the exactness of his vision, which drives each design or software tweak of the social networking software that he created, despite the now-requisite uproar each change incites among Facebook’s 750 million-plus users (whose own convictions, it should be noted, help drive subsequent iterations and privacy policies of Facebook).

Read the rest of the article by Doreen Lorenzo at CNN.Fortune

Tribal talk... amongst bouffons?
Why stop playing because you are an.... adult?
Buffoonery Workshops and Philippe Gaulier...
7 tips to boost creativity...
Buffoonery for Actors
Being creative is good business sense...
Using storytelling for effective communication...
Permission To Play...
2 replies

To Play or Not to Play…. that is the question? Being Connected …decreasing envy & sabotage?
Scroll to top