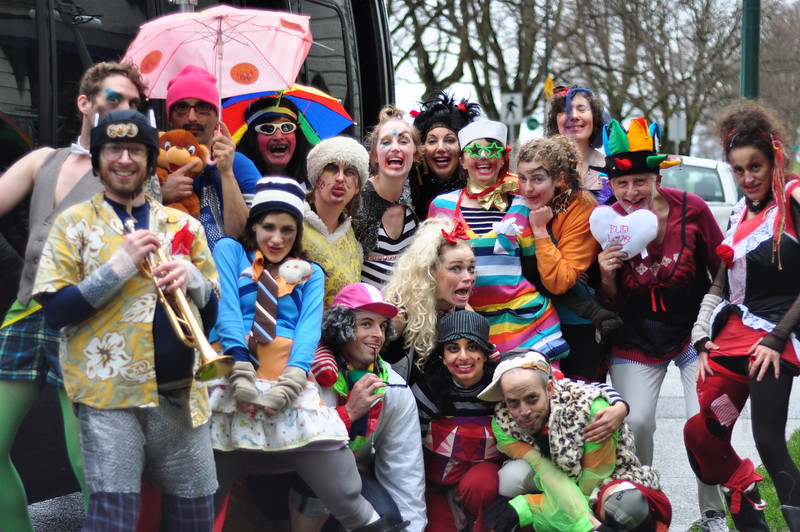 A fantasy of mine turned into a reality last Friday afternoon, April Fool’s Day.

Flash Mobs intrigue me, call to me. Dancing seemingly spontaneously in guerrilla theatre fashion suits me. I watch them online, and get goosebumps each time I watch the Olympics “Dancing In the Street” flash mob of thousands on Robson Street.

But, I had never experienced one. And, the one that kept creeping into my imagination contained many bouffons.

Then, after recently taking my buffoonery workshop, a dear friend, enthusiastically said, “You should do something for April Fool’s Day with your bouffons!”.

You guessed it. Her idea married my fantasy, and things started to move. I surveyed my bouffon students to see who was game. The reactions were keen. Very keen.

As I drifted into my sleep each night a new idea would come to me. Can’t have bouffons wandering around looking unsuspecting and then dancing. That won’t work. They have to arrive…. by… limo. Yes!

I booked a BIG limo.

How perfect. A choreographer suddenly needed me and my buffoonery expertise for a show. “Tell you what, Mz. Joey Bothwell, you need me, and I need you.” She was in.

We created our dance.

We weren’t going to have thousands of bouffons but it wasn’t just about us.  It was about bringing a moment of wacky joy to the unsuspecting observers and giving them an opportunity to dance, as well.

On Friday afternoon, April 1st, at Library Square in Vancouver, a big black limo bus filled with bouffons mysteriously arrived. We descended into the area with a quiet curiosity. We explored, approached humans, tried doors, looked at shoelaces, and eventually broke into our ritualistic dance, inviting the humans to join in.

And, some did. Some watched in disbelief, but most smiled and enjoyed a very different flash mob.

Our objective as a group was to permit everyone, for a few minutes, to escape  the difficulties life offers and balance its teeter totter!

I think we did.

All the bouffons who came out:

To friends who captured pictures and video:

And to Joan Athey, my bouffon publicist friend who inspired me. 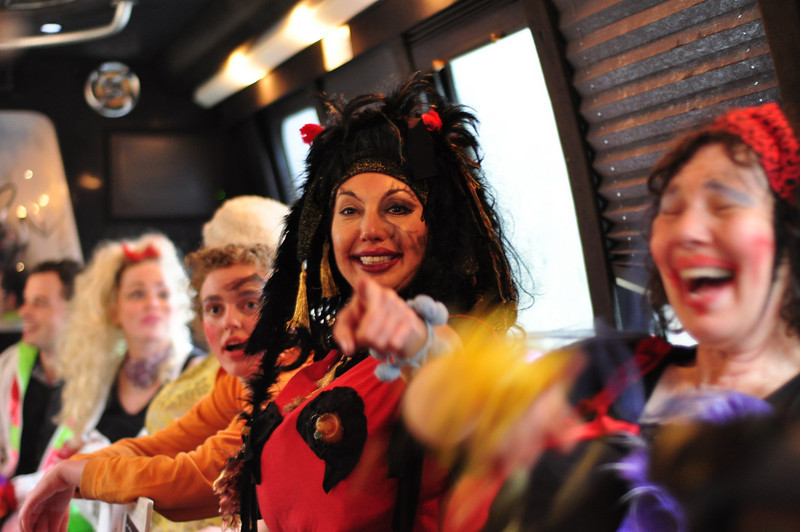 Buffoonery for Actors
Using storytelling for effective communication...
Remembering to Play....
Happppyyyy Hump Day!
A Reason To Smile...
Acting Is an Art, Actors Are a Business
Buffoonery Workshops and Philippe Gaulier...
Laughter.. how could it not be good for you?!
2 replies