Sunday was one of the first rainy, cold days we have had in a long time, and it was way too easy to stay home curled up with a book and a cozy blanket. I tend to not do “easy”, so pulled up my socks (actually that is a lie as I tried one more time to go sockless) and got myself to the CBC Fringe venue to see two shows.

The first one by well-established playwright David Mamet, “Romance” starts and finishes with punchy energy. An all-male cast of seven makes for a lot of testosterone to observe but there are a many surprises that also contain touches of estrogen. This Canadian West Coast premiere produced by Queer Arts Society is not for the easily offended person. I liked that! It seemed that as long as we all agreed that what was being explored was far from politically it was a relief to just let go! (remember “All In The Family”?)

And, let go is what THEY did. The scene starts as a slightly confused court appearance, and rapidly deteriorates, guided brilliantly and boldly with the Judge at the helm. I had flashes of films – Network (David C. Jones’ speech rehearsal moment had a taste of Ned Beatty, and the Judge reminded me of Peter Finch, several times), and 12 Angry Men (with a twist).

“Why did you go to law school if you didn’t want to lie?” “How can you have peace in the Middle East if you can’t have peace at home?!” “ I’m a homosexual.” “What is it you guys actually do?”

Directed by Adam Henderson, the actors, Brian Hinson (the Judge), David C. Jones (Prosecutor), Chris Robson (Defense Attorney), Bert Steinmanis (Defendant), Robin Jung (Doctor), Wolfgang Schmidt (Bernard), have many great zingers to deliver. And, many themes to juggle. Not an easy feat, but one they pull off. 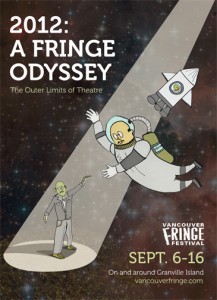 A brief break to absorb the crazy exploration of truth in “Romance”, and then back to the same venue for another bold gesture with a completely different taste of truth seeking: “No Tweed Too Tight: Another Grant Canyon Mystery” by Ryan Gladstone and Bruce Horak. This one man show is alternately played by both actors. Sunday evening saw Bruce Horak play the superhero-ish, swaggering hipster insurance investigator. Oh yeahhh. HIS rollicking journey took him through a mysterious adventure that had him waking up over and over again in strange startling places and situations. “Where am I?”

“Romance” and “No Tweed..” certainly made for contrasting outings. I’d say this Fringe evening, for me, was about language and bold statements.

The Vancouver International Fringe Festival continues on to late Sunday evening, September 16. Join the fun, thoughtfulness, and get your imagination rolling. Exercise some laugh muscles, too. Don’t miss it.

(By the way… if you saw these shows, would love your feedback!)

Traces... Their Truth?
Fringe Beginnings...
Fringe Onsite
Some musical Fringe: “Hard Times” and “The Water Is Wide”
“Loon” and “The Ballad of Herbie Cox”
A Conversation with Jeff Hyslop....
0 replies

Fringe Beginnings… Some musical Fringe: “Hard Times” and “The Water Is Wide”
Scroll to top